HONG KONG (Reuters) – Huawei Technologies Co Ltd is in talks with Digital China Group Co Ltd <000034.SZ> and other suitors to sell parts of its Honor smartphone unit in a deal that could fetch up to 25 billion yuan ($3.7 billion), people with knowledge of the matter said.

Embattled Huawei is resetting its priorities in the face of U.S. sanctions and will focus on its higher-end Huawei phones rather than the Honor brand which is aimed at young people and the budget conscious, they said.

The assets to be sold have yet to be finalised but could include Honor’s brand, research & development capabilities and related supply chain management business, two of the people said.

The deal may be an all-cash sale and could end up smaller, worth somewhere between 15 billion yuan and 25 billion yuan, one of the people said.

Digital China, the main distributor for Honor phones, has emerged as the frontrunner but other prospective buyers include Chinese electronics maker TCL and rival smartphone maker Xiaomi Corp <1810.HK>, the people said.

The sources declined to be identified as the talks were confidential.

Huawei and TCL declined to comment. Digital China and Xiaomi did not respond to requests for comment.

The Honor brand was established by Huawei in 2013 but the business mostly operates independently from its parent. It competes with Xiaomi, Oppo and Vivo in China’s highly competitive budget phone market and its phones are also sold in Southeast Asia and Europe.

Kuo Ming-chi, an analyst at TF International Securities, has said that any sale by Huawei of the Honor smartphone business would be a win-win situation for the Honor brand, its suppliers and China’s electronics industry.

“If Honor is independent from Huawei, its purchase of components will no longer be subject to

(Reuters) – U.S. supply chain management software firm E2open LLC is nearing a deal to go public through a merger with blank-check acquisition company CC Neuberger Principal Holdings I at a valuation of more than $2.5 billion, including debt, people familiar with the matter said on Tuesday.

An agreement could be announced as soon as Wednesday, the sources said, cautioning that talks could still falter. E2open is owned by private equity firm Insight Partners.

The sources requested anonymity because the matter is confidential. CC Neuberger declined to comment. E2open and Insight Partners did not immediately respond to requests for comment.

CC Neuberger I is a special purpose acquisition (SPAC), or shell, company that uses proceeds from an initial public offering to acquire a private company, which then becomes public as a result.

Merging with a SPAC has become a popular alternative to going public in a traditional initial public offering, as it involves less regulatory scrutiny and more certainty over the market valuation and funds raised.

E2open’s revenue is around five times what it was in 2015, one of the sources said. It stands to benefit as companies automate their supply chains further in the COVID-19 pandemic.

Led by veteran Wall Street dealmaker Chinh Chu’s investment firm, CC Neuberger I raised $414 million in an IPO in April with the aim of buying a company in the financial,

By Joshua Franklin and Echo Wang

(Reuters) – Triller Inc, a budding competitor to popular short-video app TikTok, is in discussions with blank-check acquisition companies about a merger which would take the U.S. social media company public, according to people familiar with the matter.

The deal would come as Triller seeks to capitalize on TikTok’s woes. U.S. President Donald Trump’s administration has ordered TikTok’s Chinese parent ByteDance to divest the app, citing concerns that the data of U.S. citizens could be accessible to China’s Communist Party government. TikTok has sued the U.S. government to stave off a ban from U.S. app stores while deal negotiations continue.

Triller, which was launched in 2015 and only has a fraction of the 100 million users that TikTok boasts in the United States, has said it hopes that the uncertainty over its rival’s future will drive more influencers and users to its platform.

Triller is working with investment bank Farvahar Partners as it negotiates a potential deal with a so-called special purpose acquisition companies (SPAC), the sources said. A SPAC is a shell company that raises money in an initial public offering (IPO) to merge with a privately held company which then becomes publicly traded as a result.

Triller’s SPAC negotiations are happening alongside discussions with investors about a private fundraising round, led by investment bank UBS Group AG

Triller has so far secured around $100 million in that round at a $1.25 billion valuation, according to the sources. It is deliberating whether to proceed with the private fundraising or opt for the deal with a SPAC, one of the sources added.

LONDON (Reuters) – HSBC HSBA.L will target net zero carbon emissions across its entire customer base by 2050 at the latest, and provide between $750 billion and $1 trillion in financing to help clients make the transition, its Chief Executive Noel Quinn told Reuters.

In the strongest statement by Europe’s biggest bank on climate change to date, its CEO outlined HSBC’s ambitions to align its activities with the Paris Agreement.

“COVID has been a wake-up call to us all, including me personally, we have seen how fragile the global economy is to a major event, in this case a health event, and it brings home the reality of what a major climate event could do,” Quinn told Reuters in a video interview.

HSBC aims to achieve net zero in its own operations by 2030, he added.

While other UK banks such as NatWest NWG.L have already set similar net-zero goals, HSBC’s aim to achieve it across its huge Asia-focused client base is one of the most significant pledges made by a global lender to date.

However, the bank will be closely watched for how quickly and fully it pursues its new goals, which are mainly stated as ‘aims’ rather than hard commitments.

It will also face scrutiny on whether it has allowed itself leeway to continue financing some fossil fuel-linked clients, especially in developing markets.

HSBC has come under increasing pressure from activists, shareholders and politicians who say it is contributing to climate change by financing fossil fuel and other environmentally harmful projects.

Quinn said the bank is focused on expanding its capital markets-focused carbon transition policies, to a broader one encompassing all its activities across financing,

MacRumors readers can save 25% on the 1Password Family subscription in October, bringing the price of the service down to $44.88 per year, from an original price of $59.85. On a monthly basis, this means that the service will cost $3.75 per month (originally $4.99 per month). 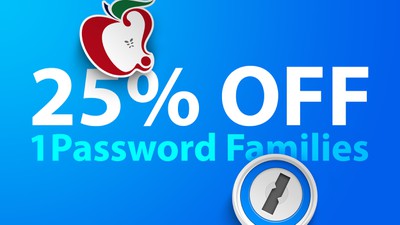 Note: MacRumors is an affiliate partner with 1Password. When you click a link and make a purchase, we may receive a small payment, which helps us keep the site running.

To get the deal, head to 1Password’s website and click “get started” on the landing page for the discount. It is billed annually, so you’ll pay $44.88 upfront for an entire year of 1Password Families. The regular $4.99 per month price of 1Password Families will kick in after your first year ends.

This offer is only for new 1Password customers, and will expire on October 31, 2020.

1Password is a password management app that is compatible across Apple devices, including iPhone and Mac. It allows you to create and store strong passwords across all of your most important online accounts, and alert you when your passwords are compromised.

1Password Families is built to support up to five family members, providing each person with access to the password management service. It supports 1GB of encrypted storage for documents, cross-platform sync, item history backup, 1Password Watchtower for compromised passwords, and more.

If you’re on the hunt for more discounts, be sure to visit our Apple Deals roundup where we recap the best Apple-related bargains of the past week.