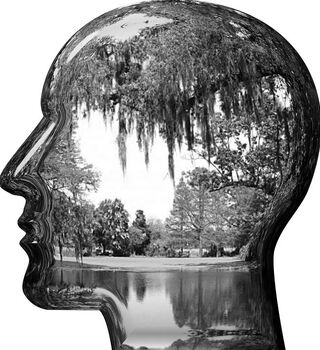 Generative adversarial networks are a relatively recent innovation in artificial intelligence machine learning where two artificial neural networks simultaneously train one another by competing. Backpropagation is applied to the dueling neural networks. GANs enable machines to imagine and create their own novel images. Brain activity is used to adjust the latent space to provide an unlimited output of possible samples.

In this study, 31 participants were instructed to passively watch images and mentally focus on the images that match certain criteria as their brain activity was recorded by non-invasive electroencephalogram (EEG). The participants were tasked to complete eight facial category recognition tasks by focusing on faces that matched the categories of smiling, not smiling, blond or dark hair, young, old, female, or male. The brain responses were divided by participant into training and testing data.

A classifier separated the brain responses in the testing set based on the criteria of relevant or irrelevant images. The vectors of the relevant images where fed to the intention model which generated a visualization of the mental target. Thus, the participant’s neural reactions parameterize an intentional model that can be used to generate novel images to illustrate a person’s perceptual categories. Then the computer-generated images were evaluated by the participants for validation.

The worldwide brain-computer interface market is projected to grow over the next seven years at a compound annual growth rate (CAGR) of 15.5 percent to reach of USD 3.7 billion in revenue by 2027 according to Grand View Research. Brain-computer interface advancements may one day help treat a variety of brain disorders and diseases such as dementia, epilepsy, paralysis, Alzheimer’s disease, Parkinson’s disease, and sleep disorders. With each new innovative discovery, science breaks existing limits with novel paradigms in hopes of a better future ahead.