Amazon (AMZN) held its much-anticipated Fall “Hardware Event” this week. I call it “gadget day” because I can’t help but think of “Inspector Gadget” every time I hear of the new products Amazon announces. Yet, as impressive, affordable, and disruptive as some of the new products and services are, for Amazon, the significance of Gadget Day extends far beyond more gadget sales. The second order effect is that Amazon wants to convert gadget buyers into Prime member subscribers. And once you’re a Prime Member, it’s similar to the last lines of The Eagles’ song “Hotel California”:

We are programmed to receive. You can check out any time you like, but you can never leave.

Translation: once a consumer experiences the many benefits and services of being a Prime member, they’ll continue to renew year-after-year. And the new gadgets will draw more consumers to the Amazon website and, subsequently, to Prime.

Without a doubt, my favorite product of this year’s Gadget Day was the new Ring “Always Home Cam” shown below. It’s a fully autonomous surveillance drone that flies around your house – on a mapped path which you can program – and then re-docks itself for charging once the reconnaissance flight has reported to you and completed its mission. The device is integrated with the already highly successful Ring Alarm, which can trigger a launch of the drone cam and a pre-programmed “alarm” flight plan. The Always Home Cam is expected to start shipping next year and to cost $250. You can watch a short video of the security cam here. 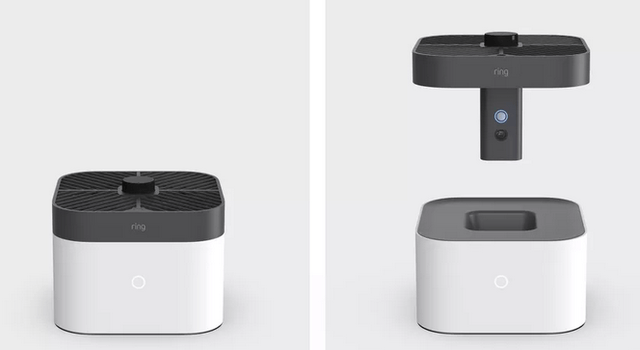 Instead of simply encouraging customers to buy more cameras and set them up in more locations around the home, how could we solve this problem with one solution? We wanted to create one camera that could give users the flexibility of every viewpoint they want around the home, while delivering on our founding principles of privacy and security. 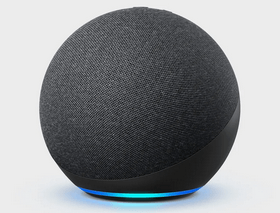 The all-new $100 Echo Show talking speaker (shown above) swivels to follow you around the room and keep the speaker pointed in your direction. The Echo is one of the world’s best selling home audio devices and is a key component of Amazon’s strategy to bring Alexa AI into people’s homes. 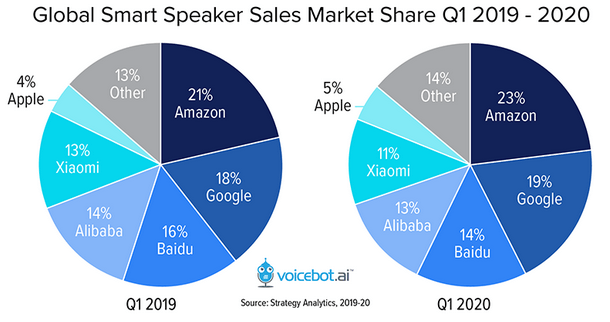 There were lots of other goodies announced on Amazon’s Gadget Day – including more new Ring security products, a new game streaming service called Luna, an updated Fire Stick and new Fire Stick “Lite”, and new bells-n-whistles for Alexa and Echo. Seeking Alpha News Editor Brandy Betz did an excellent job of summarizing all the new announcements.

Of course, it’s hard to prove exactly how much additional traffic Gadget Day generates to the Amazon website. This is purely anecdotal, but I personally went to Amazon.com as soon as I heard about the surveillance drone. I surfed the site for a while and ended up placing an order (but not for the drone, it is not yet available). I talked to several friends who were likewise drawn to the website after hearing about a new gadget that caught their attention and I casually asked if they placed an order while they were there and all but one said “yes”. After all, there is a reason Amazon spends time and invests money on holding these Gadget Days – it’s just great business and marketing. In fact, the gadgets are so cool they effectively market themselves in that every major media outlet is writing reviews about them.

No doubt, these cool new gadgets have already and will continue to generate buzz and lead to higher gadget sales down the road for Amazon. But, in my opinion, the second order effect of the “gadget buzz” is attracting more customers to the website which will result in more Prime Member subscriptions.

And why not? The benefits of AMZN’s $119/year Prime membership – including the Prime Video library, Amazon Fresh grocery deliveries and no delivery minimum for many low-priced items – are certainly much greater than Walmart’s (WMT) $98/year “Plus”, which apparently only has the $0.05/gallon gasoline discount to differentiate itself to compete with Prime. But Walmart will have a hard time competing with huge head-start Prime Video and Prime Music has. A complete list of Prime Member benefits is shown here:

It obviously isn’t a straight-line comparison because we are talking about retail sales as opposed to software, but Prime Member renewals can be viewed in a somewhat similar light as a SaaS recurring revenue model.

While Amazon has yet to officially announce Prime Day 2020 (at least not before I wrote this article), c/net reports it has obtained an internal Amazon memo sent to employees that says the event will be held on October 13-14. That is a departure from previous years as it was delayed from July due to the global pandemic.

But the delay might be a blessing in disguise for two reasons:

As a result of the pandemic, a well-received Gadget Day and the upcoming Prime Day, I suspect Amazon will continue to roll-up impressive sales growth as it continues to build out its global and unrivaled fulfillment infrastructure – expanding its square footage by 50% this year as compared to 15% in 2019. Such a large expansion of its physical footprint should lead to significantly more market share gains for Amazon going forward.

Another ancillary benefit of Gadget Day is by driving Amazon’s advertising business – a big-tailwind that many investors may be overlooking and under-estimating. Market Dive reports that in last year’s holiday quarter, Amazon’s advertising revenue jumped 41% to a record $4.8 billion. That growth rate was almost double Amazon’s consolidated annual revenue growth of 21% last year. In addition, advertising generates strong margins. On the Q2 conference call, when Olsavsky was discussing margins, he paired advertising with Amazon’s cloud segment (“AWS”) for the increase in gross margins:

On the gross margin side, it’s very much a mixed bag right now. There’s – before the COVID outbreak, the positives were generally AMZL costs – delivery costs were becoming more efficient. Advertising was – and AWS were certainly a strong component of gross margin increases. Product mix could go either way depending on the country.

And don’t forget Amazon’s thrust into healthcare and the wearable Halo product. Halo will include a wearable band and initially cost $99 and $4/month after six-months. Halo will generate more subscription revenue and combined with PillPack and Haven Healthcare (a joint venture along with Berkshire Hathaway (BRK.A) and JPMorgan (JPM)) demonstrate Amazon’s strong ambitions to add healthcare to its portfolio as yet another significant long-term revenue stream.

As a result of these catalysts, and the obvious uplift of accelerated e-commerce adoption due the pandemic, Amazon should see its trailing twelve-month (“TTM”) net sales begin to significantly accelerate from the 28% demonstrated up to Q2 2020: 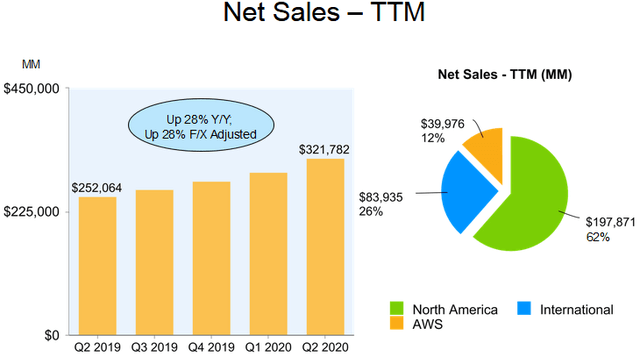 The market appears to be in a tug-of-war while trying to determine if it’s time for investors to rotate out of highly valued big-tech stocks and into undervalued cyclical sectors like industrials or materials. As a result, AMZN stock went on a wild ride this week – trading in a near $300 range (~10%) just in five days of trading: 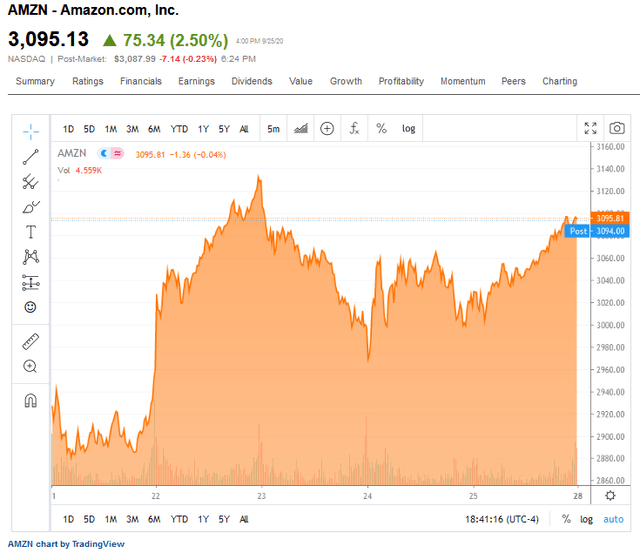 Despite ending the week nicely higher, AMZN is still down ~13% from its all-time high of $3552 set back on September 2.

Yet I have my doubts about the rotating out of big-tech thesis. With the 10-year Treasury seemingly pegged at 0.66%, and with Federal Reserve Chairman Powell recently saying the Fed will likely keep interest rates at near zero out to 2023, it seems too early to get out of companies like Amazon who are delivering excellent top-line growth and FCF. Meantime, it’s hard to get bullish about industrials and materials when there are 25 million Americans still receiving unemployment benefits and new jobless claims are still stubbornly high and actually went up week-over-week: 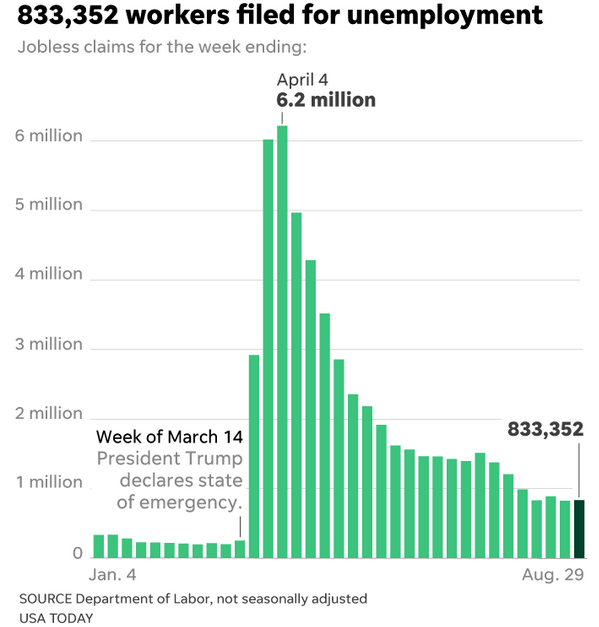 Unfortunately, that’s not the only metric ticking up … so too are new COVID-19 cases in America, which are also at a stubbornly high level over 45,000+/day as we head into Fall flu and holiday season when many college students will be returning home for Thanksgiving dinner with their extended families: 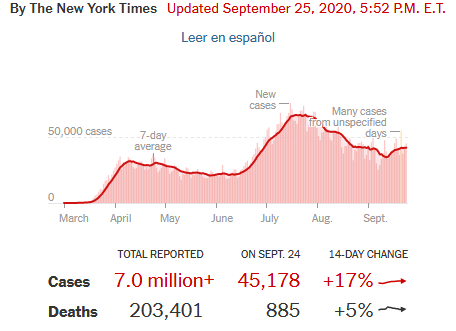 The point is, to rotate out of big-tech and into cyclical sectors like industrials, materials, or – God help us – energy, seems to be wishful thinking given the current economic backdrop.

As a result, investors are still searching for growth. And when it comes to growth, whether it’s in online sales, Prime members, AWS cloud services, growing and high-margin advertising revenue, or a growing number of cool, affordable, and disruptive gadgets – all I can think of with Amazon is: Go Big, Or Go Home.

Disclosure: I am/we are long AMZN. I wrote this article myself, and it expresses my own opinions. I am not receiving compensation for it (other than from Seeking Alpha). I have no business relationship with any company whose stock is mentioned in this article.

Additional disclosure: I am an engineer, not a CFA. The information and data presented in this article were obtained from company documents and/or sources believed to be reliable, but have not been independently verified. Therefore, the author cannot guarantee their accuracy. Please do your own research and contact a qualified investment advisor. I am not responsible for the investment decisions you make.